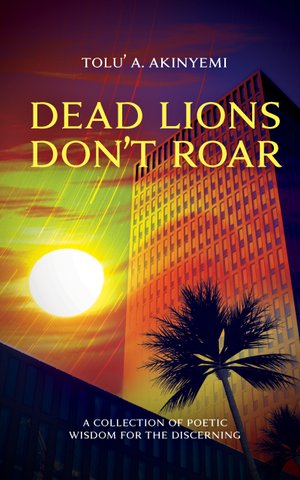 A motivating and inspiring book of poetry should always leave the reader with thoughts about personal development and doses of inspiration … and that is exactly what Dead Lions Don’t Roar does. Whilst the poem entitled the name of the collection speaks volumes about using our gifts and talent and finding our own unique roar, there are a number of other poems that share the essence of the book. Here is a sneak peak of one such poem:

If Men were God

There would be no more us,

Forgotten with the times,

An atonement for our sins

If men were God….

This poem makes us think about what each of our individual role and purpose is in life, which will then motivate us to achieve…our very best. This is the entire purpose of Dead Lion’s Don’t Roar. 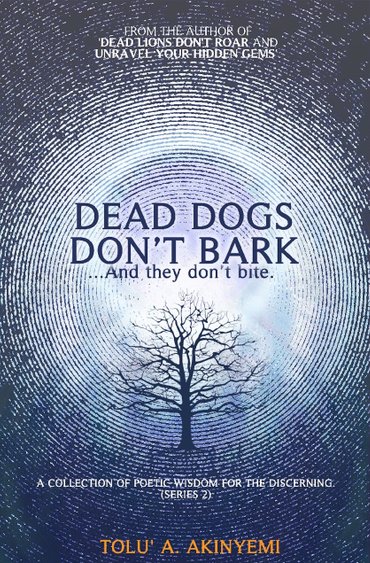 A follow on to the success of Dead Lions Don’t Roar, Dead Dogs Don’t Bark goes one step further. As well as self-motivation, Dead Dogs Don’t Bark digs deep into society, into behavior and into relationships that make existence worthwhile. An  Insight into the true power of the collection rings strong in the following snippet:

Cuddle up to Excellence

Else Mediocrity can catch up with you like a heatwave

Released in full force like a loaf oven baked

The days of long service awards are over

If your dream is to buy a Range Rover

Then you have to embrace excellence

This poem reinforces that it is healthy to have dreams and ambitions but that we must remember to strive for them and not just expect them … not taking things for granted and putting your best foot forward in life encapsulates the resonating theme of Dead Dogs Don’t Bark. 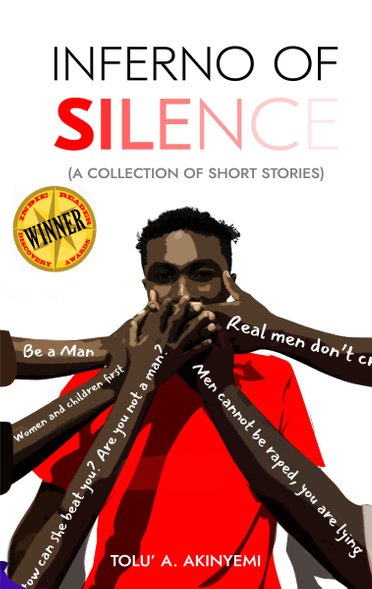 Excerpt for Inferno of Silence

Tolu' has shown that a work of fiction can be written with courage and vulnerability. The seven stories in "Inferno of Silence" are immersive, gripping and mirrors the everyday burden we face in the society.

Racism, Relationships, Religion, Mental Health, Depression and Political Upheavals amongst many others makes this collection of short stories a classic.

Excerpt from the Story “Inferno of Silence”

Kunle dropped his bag on the dining table. The

table was starting to creak from all the unplanned

baggage it silently bore. He enjoyed taking the

ferry a few minutes from his office. Not only did it

afford him a few minutes of silence before his wife

got home, he also enjoyed the view from the boat.

He especially liked watching in the far distance,

the ships berthing at Apapa ports, swaying on the

waves of the sea.

He liked to think that he bore the weight of his

problems on his shoulder like the ports bore the

weight of the ships. But he was not the sea, he did

not bear the load on his shoulder so gracefully. He

was a man, a man whose wife evoked unfamiliar

emotions within him. He had tried to discuss this

his concerns, in the process his hands waving away

the smoke from his tobacco towards the east. “All

women are crazy,” he had said, “you just have to

know how to handle them.”

Handle not like a mother ‘handled’ a child, but more

danfo driver or how some women ‘handled’ the

devil they believed possessed a slow housemaid. He

did not like this type of handling; in fact it repulsed

him. He had watched his father punch his mother

into submission and he had vowed never to be that

man; and now that his father was emphasising it,

he blamed himself for seeking marital advice from

a man he detested in the first instance.

“This is not the end,” I consoled myself.

The picture was starting to become clear to me.

Each time I looked myself in the mirror, my

reflection yelled the answer to the questioning

stares and unfair treatment I received in the city

and on the field. I never knew I was black until I

arrived in Europe. The only thing I knew was that

I was a few shades darker than the usual dark. My

friends called me charcoal or baba dudu but only

on few occasions and as a praise remark rather

than a taunt. It never crossed my mind that racial

debates will hang loosely like a mist over sound

judgement. The bearded Indian was right. I cut out

a cardboard sheet and wrote on it with a marker

pen, I AM NOT INFERIOR. And on another,

I wrote BLACK IS NOT A SYNONYM FOR

INFERIOR, and hung them on my wall in my

apartment. I had to come up with a mantra that

could guide a newcomer like me until I was able to 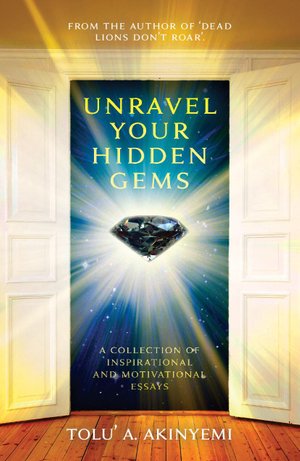 Excerpt for Unravel Your Hidden Gems

Everyone has a Gem and  talent inside of them. Life can stop us finding or realizing the beauty of that. This collection of short essays illuminates possibilities and reminds us of the importance of altering our minds to achieve our best. The author, Tolu' A. Akinyemi, recognises that we all have a current that controls our life:

“Every relationship in your life is a current, moving you towards your dreams or away from them”.

Show me your friend and I will succinctly tell the kind of person you are, show me your mentors and I will tell the direction your life is moving. “Iron sharpens Iron” – your network determines your net worth. True wealth can be calculated in the friends we keep and the relationships we grow.

Powerful stuff and just the start of the resonating observations made in this page turning life manual. 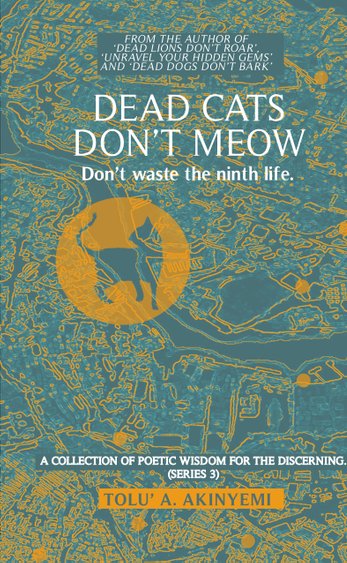 Dead Cats Don’t Meow is Tolu’s third book of poetry and to the reader, any lover of discerning poetry, it is clear that he has learnt lessons, been on a journey and is constantly learning. The quality and the depth of poetry, hard to believe as it is, has transcended Dead Lions Don’t Roar and Dead Dogs Don’t Bark, with deeper understanding and even more love. The most perfect example of this is the last two stanzas of ‘musings’:

In the journey of life

Life has taught us lessons

There is no manual to go to bed

Neither is there an anecdote for a bitter person

Than to give them some recipe

From the cookbook of love.

Tolu’, you clearly apply this belief to the life you live, and as you breath it onto the page, you help grow and bring abundance to all those who are lucky enough to read your ‘musings’. Thank you for Dead Cats Don’t Meow. 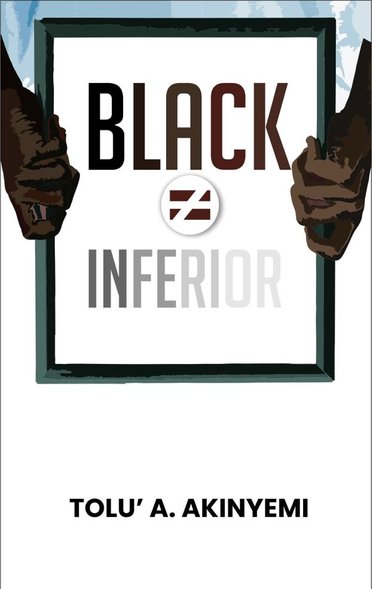 In Black ≠ Inferior, we see Tolu' Akinyemi reacting in response to the world, to issues that affect Black people. Here, we see a poet shedding off his burdens through his poems; hence, the beauty of this collection is in the issues it attempts to address. In this collection, Tolu' wears a coat of many colours – he is a preacher, a prophet, a doctor and a teacher.

We see Tolu' the preacher in these lines:

‘I wish you can rise through the squalor of poverty

and voices that watercolour you as under-represented.

I wish you can emblem your name in gold,

and swim against every wave of hate.’

This is a collection of poems fit for present narrative as any (Black) person who reads this collection should beam with confidence at the end. This is what the poet sets out to achieve with his oeuvre. 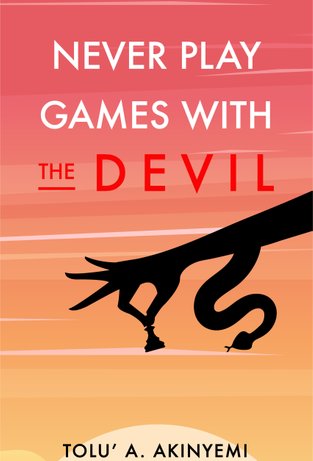 Excerpt for Never Play Games with the Devil

Hear the poet in a succinct moment of self-adulation, he writes:

“My brain thinks faster than my words can convey.
My mind works magic. Can I live this life forever?”

Divided into three sections, Never Play Games with the Devil showcases a poet, at the height of his powers, exploring several themes in different voices. 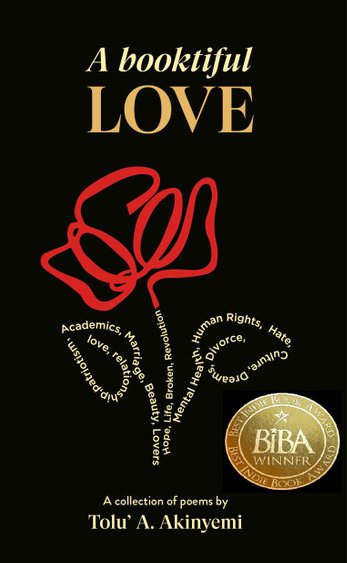 Excerpt for A Booktiful Love

A Booktiful Love is a poetry collection that

emphasises that there is no shame in vulnerability, as long as we are not stuck in a rut for too long. See two stanzas from the poem "It’s Okay Not to feel Okay"  below:

negative wind,
and resentment that have found a home in your heart.
It’s okay to weed out the debris
that wrestles with your freedom.

Excerpt for Never Marry A Writer

Tolu' weaves words like a veteran poet, writing powerfully on family, love, loss, with a scorching curiosity for the world around us. This collection beams its light on the ability of writers to document and observe as seen in these verses:

'Never marry a writer if you are a prisoner of emotions.

The shackles will be broken after the first chapter.

Never marry a writer if your temper is a high-tension

wire. The revelations will be more shocking

than a Daily Mail screamer.'

This is a collection of poems that enscapulates the human experience with great panache and skillful art.